The Post Landfill Action Network (PLAN) and US Composting Council (USCC) are launching a partnership to provide resources in the coming year to stakeholders of composting efforts on college and university campuses, the organizations announced today. Read more 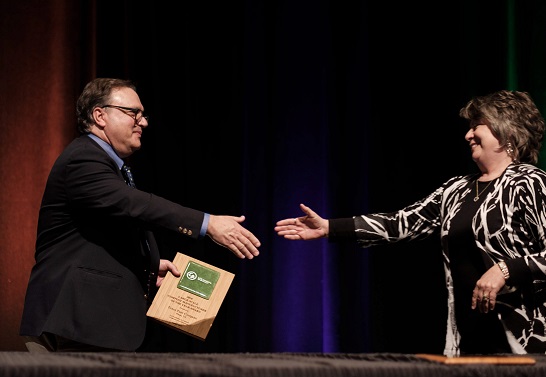 Composting facilities in Texas and Tennessee and a non-profit program in San Diego, CA and an energetic program in Minneapolis were among those who were honored by their peers by the US Composting Council at a January ceremony.
Read more 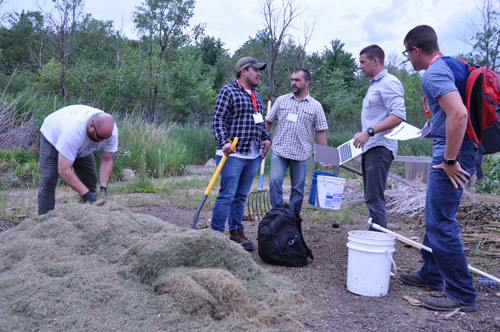 Participants at a University of Wisconsin-Stevens Point training course.

A state-of-the-art biosolids composting facility; a student-run compost operation serving a mid-size city; and a massive project using compost to grow potatoes, beans and peas in the sandy soils of the Midwest – all USCC member projects – received honorable mention in the 2017 Rathmann Challenge: Mitigating Climate Change by Expanding the Use of Compost.

We talked to all the member Honorable Mentions about the grants process (which was quite unusual) and how the $10,000 in funding will help each of them on the road to the even bigger project they had hoped would be funded, as well as a member of the Rathmann family about the Foundations excitement for these finalists.

In mid-2016, excitement rippled throughout USCC and the compost industry when the Rathmann Family Foundation’s Innovation Center, which seeks to provide competitive grants to best in class, high-performing individuals, teams or nonprofits with interesting, clever and forward-thinking ideas via an online process with both competitive and collaborative components, announced it was targeting the issue of addressing climate change through compost with a potential $300,000 grant to Top Honor and Even Bigger Idea recipient.

Throughout the winter and 2017, the Foundations’ Challenge Committee evaluated approximately 60 applications, narrowing them down to five, which they visited over the summer of 2017. The Challenge Committee is up front about understanding the risk and time put into applications, as well as its mission to engage committed applicants (read more here in Executive Director Rick Rathmann’s blog post).

“Compost is becoming more prominent in the conversation about climate change,” said Emma Rathmann, Grants Management Assistant, of the decision of where to focus the Rathmann Challenge and Even Bigger Idea Opportunity for 2017 (it was the second Rathmann Challenge). They had a board member who advocated for the topic.
The Rathmann Family Foundation has spent years funding research into the capacity for compost to sequester carbon in the soil. “We are dedicated to helping someone make a lot of difference to the world,” she said.
Three USCC member companies were runners-up. The top Big Idea winner was Center for Eco-Technology in Massachusetts.

Livingston’s Blend Compost is the result of Spotsylvania County’s commitment to diverting biosolids and yard trimmings — and soon, food scraps, as a result of the Rathmann funding – from disposal. Superintendent Doug Crooks said the county has a $33 million LOT (Limits of Technology) wastewater treatment plant that removes the maximum amount of nutrients possible to go to composting instead of land application. Recently, they’ve met with restaurants, hospitals and large generators of food scrap to prepare the facility to accept food scrap.
“The scope of the process was impressive,” Ms. Rathmann said. “We got to walk through every step of the plant,” she said. “They have the resources and ability to reach a lot of people.”

This student-run compost facility grew from handling the campus’s cafeteria waste to the major source for restaurants and other waste for the City of Tucson. Chet Phillips, ASUA Sustainability Coordinator and Compost Cats Project Director, said that community partnerships, such as working with the San Xavier Co-Op Farm, have been key to their program’s growth. The students hope to grow the program even further with additional sources of feedstock, equipment and work with local schools.

“We were impressed that when we were there, we got to meet their partners who were not only college, but high school and elementary students who they were planning to bring into the project,” Ms. Rathmann said. “I also appreciated that they were problem solvers.” Chet said the students took the lead in the designing and presenting the application to the Foundation. “Its critical that the students are in front on this,” he said.

The region around WIST is the largest producer of green beans, carrots, beets, and peas in the US; but on sandy, challenging soils. The students in the agriculture and natural resources departments of the university, after hearing about the Rathmann Challenge at an event they attended, went big—the title of their application was World‐Scale Vegetable Production Through Compost.

“If we had gotten full funding, we were talking about 10-acre research plots,” Michitsch said, to demonstrate that the application of 12 tons/acre of compost annually to achieve steady increases in carbon content in sandy soils. In Wisconsin, 50,000 acres of potatoes are grown on irrigated soils. With a 12-ton/acre application annually then 600,000 tons of compost would be utilized each year.

Instead, they will use part of the $10000 for a lab-based greenhouse project instead, as a pretrial, aimed at supporting the same conclusion. “We were impressed that their entire curriculum was dedicated to compost,”, Ms. Rathmann said.

The USCC finalists were amazed to participate in the peer review integrated into the Rathmann process: each finalist was required to review four others, provide comments, and then respond to the critiques of their peers on their own application.

“It was an extremely difficult task, because we were reviewing our competitors,” said Doug Crooks of Spotsylvania County. “I’m sure everybody did an honest job.”

“It was absolutely unique,”said Rob Michitsch. “It was interesting to get comments from our competitors!”